What is the Internet of Things?

The Internet of Things is one of the key technologies that underpins many smart city applications.

At the most basic level, the Internet of Things (IoT) is about connecting physical objects to the internet with sensors. These sensors can collect useful data to make better decisions. To enable a physical object to collect data that we can then analyse, we use smart sensors (sensors that can connect to the internet). 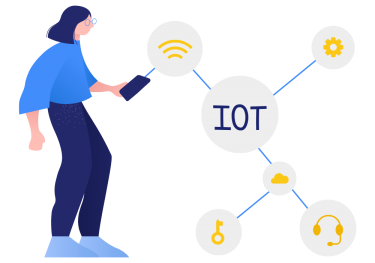 Take the example of chairs in a classroom, each with its own smart motion sensor. The data collected from these sensors can be used to make all sorts of decisions. It could be used for roll calls, provided the same student always sat in the same seat.

The Cloud is where all of the individual bits of data from each sensor comes together. Sent over the internet, the data is stored and processed in the Cloud, where data analytics (sometimes called “Big Data”) is performed. The Cloud is really a huge collection of computers, known as servers, in buildings known as data centres. Data analytics allows us to process huge amounts of data very quickly, which creates huge potential for how we use the data collected to make better decisions at an individual and societal level.

Technology also allows us to react to data in new ways. We can put actuators in the objects that can take an action themselves based on the data they receive. For example, a smart home energy system might change temperature or turn itself off based on our usage patterns detected by the sensors.

There are many other examples of how IoT is being used. On farms, IoT sensors can transmit information about soil moisture and nutrients to help predict weather and monitor crops. Wearable fitness devices allow us to monitor our activity levels and get feedback on heart rate and respiration. Smart city IoT applications are used to help plan and deliver city services efficiently and sustainably.

The Internet of Things and Smart Cities

The Internet of Things plays a fundamental role in a smart city as it allows us to detect patterns we can’t normally see. For example, smart parking that allows us to automatically determine whether a parking spot is free. While this sounds like a simple change, it can have a huge impact on decreasing congestion in cities by improving the flow of traffic. This illustrates the need to think beyond the Thing itself but rather how it can affect the environment around it when we think about how the Internet of Things can improve cities.

In a city, different types of smart sensors (location sensors, air quality sensors, speed sensors, noise sensors etc.) can be used to collect data to help city management to react to issues in real-time. For example: